Every once in a while I hope to use this blog to investigate the lighter side of database/computing topics.  After all, redundancy can (and should!) exist in many more places than corporate network architectures.  One of the places you may be surprised to hear about redundancy is college marching bands, which I feel more than qualified to talk about.

That’s right folks, I’m a bando and proud of it.  I played clarinet from 4th grade all the way through college, and was part of a marching band for 9 years.  Yes, I did go to band camp, had some great times there too, but I’m sorry to tell you that it’s not exactly like American Pie would have you believe. 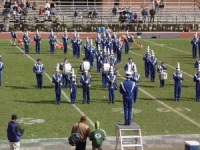 The downfall of any marching band formation is the hole, which is simply the absence of a person.  Having someone missing from a formation looks every bit as bad as someone being in the wrong spot.  In high school bands (at least where I went) there wasn’t a whole lot that could be done about it.  When a student brings a note from home saying they need to be excused from a performance taking place outside of school hours, how does a teacher argue?

In college marching band, everything was different (true for most things in college I suppose.)  One of the best explanations I’ve heard is that high school bands exist for education, so everyone needs to be able to participate.  College bands, on the other hand, are strictly for entertainment purposes, so steps must be taken to ensure the quality of each performance.  At the University of Illinois, this is implemented through redundancy in what is known as “the alternate system.”  I know many other university bands that do similar things by different names, but I’ll talk about how it works at U of I.

Every section in the band is divided into squads, each consisting of 5 people.  As a clarinet there were 20 of us, so we had 4 squads for our section.  Here’s the kicker: even though each squad has 5 people, it only has 4 spots in the formation.  The person who doesn’t march is known as an alternate.  Alternates are selected about halfway through the process of rehearsing a show, typically based upon the speed at which one is learning the drill.  Alternates continue to rehearse the drill and are present and dressed on gameday so they can step in at moment’s notice should anyone be sick, injured, or otherwise unable to perform.  So long as no more than 20% of the band is incapacitated during a game, you won’t see a difference in the drill.