This is the third post in my series on cloud backup solutions.  Previous posts were:

Today I’ll be talking about another cloud backup application called Jungle Disk.  I’ve been experimenting with it for a few months and am generally very happy with it.  Much like Mozy, Jungle Disk allows you to intelligently backup your files into the cloud.  On the contrary, Jungle Disk only provides the client application for running backups, the actual storage of the backups is separate, which I’ll explain in more detail shortly.

Jungle Disk has 4 different client versions depending on your needs.  Two of them are considered to be for personal use, the others are for businesses.  The personal editions are called “Simply Backup” and “Desktop Edition” and are respectively priced at $2 per month and $3 per month.  Both include 5GB of free backup space.  Simply Backup lives up to its name – it allows you to run either manual or scheduled backups of whatever files/folders you like on as many machines as you like.  Desktop Edition builds on that and allows you to access your Jungle Disk storage as a network drive.  It also has the ability to sync files between multiple machines.  Since I had no need for the features of Desktop Edition (and I’m also a tightwad) I have been using Simply Backup. 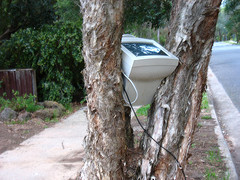 As I mentioned earlier, Jungle Disk only provides a client application for creating backups.  You have a choice as to where those backups are stored, as Jungle Disk supports both Amazon S3 and Rackspace Cloud Files.  Prices differ based on which service you choose.  (I’ve been using S3 for my backups.)

Since you’re paying the storage provider based on the amount of data stored, you have the option of how long to retain your backups before they’re deleted.  By default it’s set to 30 days, which seems way too short to me.  If you delete a file and don’t realize it until 31 days later, you would be out of luck because the last backup containing that file would have been deleted.  I currently have mine set to keep each backup for a year, but am considering disabling this option altogether and just keeping all backups forever.

Jungle Disk uses AES-256 encryption for your data, the key for which is based on a password you choose.  Don’t lose your password, otherwise you’ll be out of luck!

Backups are pretty simple – just select which folders and/or individual files you want to backup.  There’s a built-in scheduler as well as a bandwidth throttle.  Like most systems, the client will only attempt to backup files that have changed since the last backup.  It also features de-duplication technology, so only the parts of files that have changed are backed up.  This can be particularly helpful if you have a large file with a small part of it that has changed.

Restores are a snap.  You simply select the file(s)/folder(s) you want to restore, the backup date you wish to restore from, and the location you wish to restore them to.  I found restores to be quick and painless.  In Simply Backup, restores can only be done from the client.  In Desktop Edition and beyond, you have the option of restoring files from the web as well.

Since your backup files are stored by third parties, the availability of your backups is subject to their guarantees.  Both Rackspace and Amazon S3 have pretty good SLAs.

A nifty feature Jungle Disk provides is backup reports via RSS.  You are provided with a link to a private RSS feed that is updated each time a backup runs.  It’s especially convenient for me as I have my backups set to run during the day while I’m at work.  I can see that my backup jobs have completed, how long they took and how many files were backed up all from the comfort of my RSS reader.

I believe Jungle Disk could be doing a better job of selling itself, or at least letting prospective buyers figure out what they want.  They offer 4 different products at different prices, but there’s no easy way to compare them to each other.  Each product has its own page with a few paragraphs about some of the features it offers, but what they really need is a chart showing all the differences between the versions.

Another thing I don’t like is that while Jungle Disk does de-duplication, it doesn’t do de-duplication across computers.  If you have the same file on 2 computers, you’ll be backing up and storing 2 identical copies of that file.  Jungle Disk’s de-duplication takes place within what they call a “Backup Vault”, but only a single computer can store its backups within a given backup vault.  If you’re only backing up 1 computer this shouldn’t be an issue, however if you have multiple machines with identical files on them, you’ll be paying for more storage than you really need.