In my previous post I looked at 4 reasons to learn the Dvorak Simplified Keyboard (DSK).  I’ll now take a look at the other side and give you 4 reasons why you might not want to.

If you’re reading this, chances are pretty good you’re a DBA, developer, consultant, or someone else who makes their living in front of a keyboard.  Given that, chances are also pretty good that you’re a solid typist, as you’d be getting work done very slowly using the hunt-and-peck method of typing.  You’re probably not the world’s fastest, but your typing skills are more than adequate to do your job in a timely manner, right?  Assuming all of the above is true, is it really necessary to learn the Dvorak keyboard?  I can’t imagine there will ever be a job that requires you to use one.

In another light, let’s say you do learn DSK and you can now type 50% faster as a result.  Will you be able to do 50% more work?  You may sit in front of a keyboard for a living, but how much time do you actually spend typing?  “Typist” jobs aren’t nearly as prevalent as they were 50-60 years ago.  Personally, I spend far more time running queries, designing schemas, tuning and troubleshooting than I do typing, so being able to type 50% (or even 100%) faster than I do now doesn’t mean my work will get done much more quickly.

2.  What If It Affects Your Existing Typing Skills?

Will your existing typing skills suffer if you try to stuff knowledge of another keyboard layout into your hands and brain?  Learning new things doesn’t typically reduce learned skills in other areas, but only if done in moderation.  I took 3 years of German in high school and I don’t believe my ability to speak English suffered at all, but I was only speaking German a small part of the day.  Switching to the Dvorak keyboard means that the vast majority of your typing will be on a DSK.  Should you find yourself needing to use a QWERTY keyboard for whatever reason after a few months of Dvorak, you might be surprised at how much you’ve forgotten. 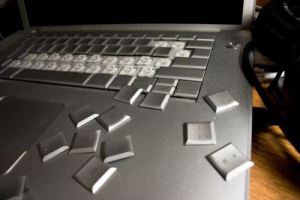 3.  Your Time Is Important

You have lots of things you’d like to do and only a finite amount of time to get them done in.  Learning the Dvorak keyboard will take up time that you could be spending getting something else done.  Is it worth the time it will take?  Is faster typing speed, the possibility of reduced hand strain and the potential for bragging rights and/or increasing your level of geekdom worth the hours/weeks/months it might take to learn the DSK?  Or is your time better spent getting work done, taking certification tests, being active in the community or spending time with your family?  Decisions like this are made every day, and only you can decide if the payoff from learning the DSK is worth foregoing the other things that time could be spent doing.

4.  Keyboard Shortcuts Will Be A Pain

If you depend on keyboard shortcuts to get things done faster, they will be a lot less convenient on a Dvorak keyboard.  Keyboard shortcuts aren’t going away, but the familiar and convenient keystrokes to hit them change along with the key placement.  For example, the left hand CTRL+{X|C|V} for Cut, Copy, and Paste, respectively, are now a lot more of a stretch, and you’ll need the use of your right hand as well.   This means the everyday practice (for me, at least) of Cut/Copy/Paste using your left hand and selecting with the mouse using your right hand won’t work anymore.  You can definitely get around this by using a keyboard or mouse with hotkeys to perform these functions, but again it’s something to think about.

In general, people are lazy and reluctant to change.  When presented with the option of staying with what works well and is familiar, or changing to something new that’s clearly better, a significant number of people will stick with what they know.  The invention of the automobile (or even the affordable automobile) didn’t have everyone selling their horses and buggys overnight – even though the auto presented clear advantages over other methods of transportation, the transition process took many years.

I’ve heard the Dvorak keyboard referred to as the “Betamax of keyboards” more than a few times, and I’m not sure I agree with the comparison.  Betamax predated VHS by a few months, but most consumers had no existing VCR (as none really existed prior to this).  This meant that most consumers would be deciding what format to purchase with no prior allegiance or constraints.  Betamax offered superior resolution, however VHS offered longer record/playback times on a single tape, which is what really won over consumers.  QWERTY predated Dvorak by about 60 years and was well-established by the time the DSK was introduced.  While the DSK offered advantages (e.g. faster, less strain, etc.) its output, a typed page, was no better than with a QWERTY.  Factoring in all the time and money that would need to be spent re-training typists and converting typewriters, and it’s no wonder the Dvorak keyboard never caught on.

The Fable of the Keys – This link was posted in the comments section of my previous post by Daniel Schobel (Twitter), a former co-worker of mine.  The article argues that there is little concrete proof that the Dvorak keyboard is better than QWERTY.  I’m betting the real truth is probably somewhere in the middle.