For quite a while now I’ve been intrigued by the Dvorak Simplified Keyboard (DSK).  I was first introduced to it by my mentor at an internship during college, and after reading about how Dr. Dvorak’s layout of the keys came to be, I thought it would be neat to learn given its advantages.  After giving it more thought, there some disadvantages as well, and I’m torn to the point that I can’t figure out what to do.  In this and the following blog post, I’ll take a look at both sides of the issue.

Believe it or not, the QWERTY keyboard was actually designed to slow typists down.  Back in the day of old-school typewriters (the ones with typebars) the typebars could easily become jammed if one were to type a letter before the previous letter’s typebar was able to return to it’s resting position.  The QWERTY layout was developed so that these jams could be reduced by forcing typists to type more slowly.  After a lengthy study of the QWERTY keyboard, Dr. August Dvorak, a professor of education at the University of Washington, concluded that the layout of the keys could be rearranged not only to eliminate the aforementioned jams, but also to improve several aspects of typing including overall speed.

Dvorak, along with his brother-in-law Dr. William Dealey, a professor of education at what is now the University of North Texas, studied the frequencies of letters in words of the English language and developed a keyboard layout that minimized finger movement by placing the most commonly used letters in the home row, where the typist’s fingers should spend most of their time.  The next most commonly used letters are in the top row (below the numbers), as moving between the home and top rows is a faster and easier motion than moving between the home and bottom rows, where the balance of the letters reside.  Other optimizations Dvorak and Dealey worked into their design is that words should be typed by alternating between hands whenever possible and that the right hand is favored slightly, as more people are right-handed. 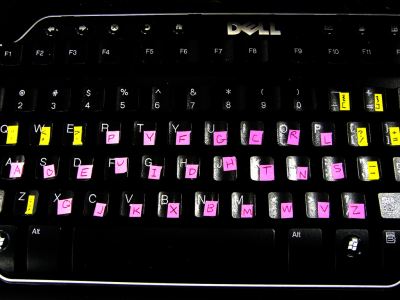 The end result was that the Dvorak keyboard (apparently Dr. Dealey either did much less work or just got shafted) was considerably faster than its QWERTY predecessor.  Dvorak began entering students trained on his keyboard in the International Commercial Schools Contest for typing.  Ten times between 1934 and 1941, DSK typists placed first in their events.  In 1935 alone 20 awards were won by Dvorak typists.  In 1937, Dvorak keyboards were briefly banned from the contests as “unfair competition” before Dvorak urged them to reconsider.

The current Guinness World Record for fastest English language typist is held by the late Barbara Blackburn, who while using a Dvorak keyboard maintained 150 words per minute for 50 minutes, with 170 wpm for shorter periods and a peak of 212 wpm.

I’ve seen claims that using a DSK can help lower the chances of carpal tunnel syndrome as well as be easier to use for those already suffering its effects.  I have never seen any scientific studies affirming this, but it makes sense to me that less repetitive movements would lower the chances of movement-related conditions and would also aggravate said conditions less.

In some ways, learning another keyboard layout wouldn’t be all that different from learning another language, and I think that’s nifty.  Of course in this case it’s a completely optional language, as I can’t really imagine a situation where knowledge of the Dvorak keyboard would be a requirement.  I view proficiency on the Dvorak keyboard as another tool to have in your toolbox which you can leverage when it’s to your advantage to do so.

The fact that relatively few people use the Dvorak Simplified Keyboard can be seen as an advantage here.  If you have a QWERTY keyboard on your desk and have your operating system set to recognize it as a DSK (which is what I recommend doing) then you’ve got an extra layer of security going on.  Unless they also know Dvorak, any other person who sits down at your computer won’t be able to type anything!  This, of course, is no replacement for locking your computer when you step away, but every little bit helps.

Many articles I’ve read about learning the Dvorak Simplified Keyboard advise you to adjust your operating system to recognize your keyboard as a DSK and just start going about your daily business without looking at the keys.  You’ll of course need an image of the keyboard to start out with, and Wikipedia’s article on the DSK has a great image you can print off and keep in a handy location.

While the above approach may work for some, I do better with instruction, so I set out looking for free typing instruction programs to at least give me some exercises teaching the basics.  Some sites claimed to teach Dvorak, but really just showed an image of the Dvorak layout while having you complete the same exercises as students learning QWERTY.  The standard home row exercise of typing “asdf jkl;” on a Dvorak keyboard doesn’t do you much good at all. Actually the number of words you can type on the DSK using only the home row is rather impressive.

The best free site I’ve found so far is typingweb.com, which has Dvorak-specific lessons.  You do have to dig for them a little bit (look under “specialty lessons”), but I’ve found the exercises to be very practical.

The Dvorak Simplified Keyboard: Forty Years of Frustration – an excellent article that’s now nearly forty years old but does an excellent job of explaining how the keyboard layout came to be.  It features some very informative images and is definitely worth a few minutes of your time to read.