I had the immense pleasure of speaking at SQL Saturday #50 in Iowa City this past weekend. To say it was an awesome time would be quite the understatement. Special thanks to Michelle Ufford (blog | twitter), Ed Leighton-Dick (twitter) and Jeff Belina (twitter) for all you did to make this event possible. Also a giant thank you to all of the sponsors who made this event financially possible.

To start at the very beginning, I made it to Iowa City in the early afternoon and had extra time to do a little exploring. Caving to my fetish for historic buildings and architecture, I checked out the Old Capitol building and a bit of the University of Iowa campus surrounding it. My inner engineer was further satisfied at the speaker’s dinner later that evening, which was held at the Iowa River Power Company restaurant, a former hydroelectric power plant. In addition to an excellent view of the river and dam, I enjoyed some wonderful food and conversation! It was a great chance to catch up with familiar faces such as Wendy Pastrick (blog | twitter), Ted Krueger (blog | twitter), Jes Borland (blog | twitter) and Alex Kuznetsov (blog). I also got to meet Jason Strate (blog | twitter), Kathi Kellenberger (blog | twitter), Chris Leonard (twitter), Arie Jones (blog | twitter), Trenton Ivey (blog | twitter) and Louis Davidson (blog | twitter) in person for the first time.

Saturday, of course, was the main event. In addition to presenting, I was able to enjoy 4 other great sessions, including: 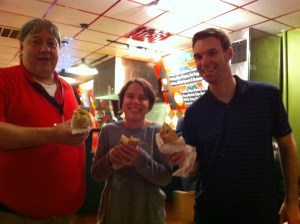 As for my own presentation, I delivered “Application Coding Sins” to a pretty full room. Despite having a time slot immediately following lunch, my presentation must have been good enough to keep everyone awake because I didn’t notice any nappers. I’m sure my tactic of throwing candy and/or swag at those who asked questions didn’t hurt either! This was not my first time presenting database topics in front of a group, but it was my first time speaking at a SQL Saturday event. All in all I’m very pleased with how it went and got some great feedback from those who attended. If you’re looking for my slides and code samples, you can download them below.

And that’s all I’ve got for SQL Saturday #50. It was a great weekend, and the only real downside is that there’s so many great speakers talking about awesome stuff and no way to attend all of the sessions. If you’ve never been to a SQL Saturday before, you should really consider it. Check SQLSaturday.com for an upcoming event near you. I know I’ll submit sessions for future SQL Saturdays, and I really hope to see you there!