I’ve loved using Redgate’s tools ever since I discovered what they were, and now that I’m a Friend of Redgate it’s even more fun because I get to give feedback to their developers and hear all about what’s coming out in new releases! Recently, Redgate announced SQL Prompt 7.2, with a bunch of new features and improvements. My personal favorite of all these is execution warnings.

Databases (and computers in general) have this pesky habit of always doing exactly what we tell them to do, instead of doing what we really meant to tell them to do. Have you ever been burned by running a query without the WHERE clause? Perhaps you ended up updating or deleting ALL the rows in a table instead of just a few? A common way to reduce the risk of this is to run those commands inside a transaction, and if you see an abnormally high number of rows affected, it’s simple to rollback. This works great, until you’re in a hurry and forget to run BEGIN TRAN, greatly upping the chances of disaster. Now in SQL Prompt 7.2 you have an added layer of protection – the tool is watching your queries and can warn you! Check it out in action:

If I try to update my table of important data and don’t specify a WHERE clause, I’ll see the following: 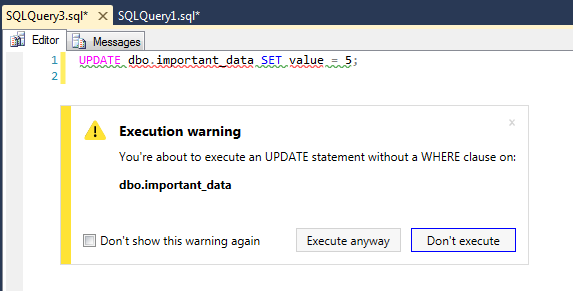 The same happens for deletes: 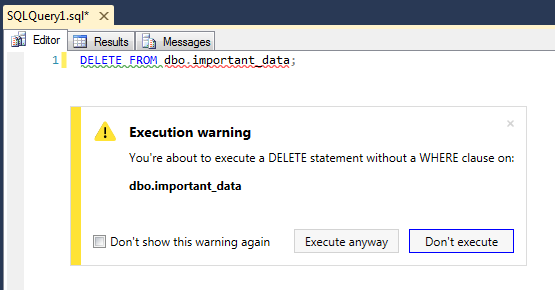 And I think it’s great that I have the option of checking the box and not showing that warning again, but I definitely won’t be doing that.

A lot of times it’s the little things that really make a difference, and I think these warnings are a simple and unobtrusive way to make sure you really meant to run what you typed.