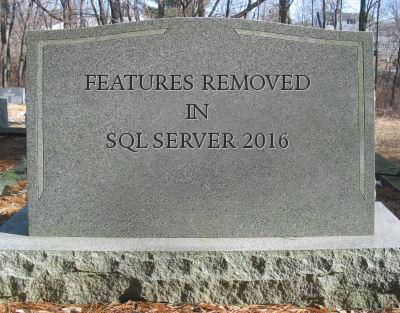 SQL Server 2016 is upon us, with all the much-anticipated hoopla and sexy new features people have been lusting over in the CTPs for months. It’s always great to see the hype around a new release. But in the circle of (an application’s) life, the arrival of new things often means others are going away for good. Let’s pause for a moment and reflect upon the two features that, as of SQL Server 2016, are no longer with us:

32-bit SQL Server. SQL Server 2016 is 64-bit only. If for whatever reason you’re running on a 32-bit architecture, sadly you’re now out of luck – 2014 is the end of the road. On the bright side, there’s probably some new hardware in your future!

Hopefully these changes didn’t catch anyone off guard. To help better prepare for the removal of features in future versions, Microsoft maintains a list of deprecated features in the next version of SQL Server. Here’s a few highlights of what’s most likely going away in SQL Server vNext:

Backup/Restore WITH PASSWORD. This one has been bad news for a long time. Stop using it years ago! If you didn’t, stop using it TODAY :)

Encryption with the RC4 or RC4_128 Algorithms. Better options have been available for a while, hopefully you’re using them for any new development at this point.

Remote Servers. Architect them out. If you really can’t, use linked servers instead.

SET ROWCOUNT. I doubt this one will ever really go away, but it’s nice to dream. The TOP keyword has been available for quite some time now.