I think one of the reasons I like computers is that they’re so much easier to deal with than people. They’re predictable, emotions never get in the way, and there’s always a logical explanation for everything if you dig deep enough. All that being said, I am grateful for my hobbies that don’t involve sitting in front of a computer all day. Thinking through the things I enjoy in my spare time, three central themes that seem to keep popping up are art, architecture, and railroads. Here’s two examples of that:

The University of Illinois will always be a special place to both me and my family. I graduated from there, was a proud member of the marching band, and got my start in public speaking there. It’s also the place where I met my wife, and to top things off we were married on campus. We have plenty of Illinois memrobilia of varying degrees of rarity, but the collection I’m most proud of is something so obscure that most Illini fans won’t even know they exist.

Fred Turner spent nearly 50 years of his life at the University of Illinois, beginning as a student in 1918, and ending with his retirement in 1966 as the university’s first Dean of Students. Turner loved Illinois and its history, and in 1946 he and his wife, Betty, decided to highlight these topics in Christmas cards they sent to their friends and family. Turner had recently picked up the Japanese art of woodblock printing, and decided to share it by creating a hand-carved woodblock print of a historical site in Illinois each year as the cover of their Christmas card. For an extra tie to campus, the blocks for printmaking were carved from wood salvaged from one of the University’s earliest buildings. They printed 260-275 by hand at their kitchen table each year until 1974.

The cards contain a main image on the front, a brief description and Christmas message from the Turners on the inside, and a fact sheet with more information on the historical building or site chosen. Here’s what they are like: 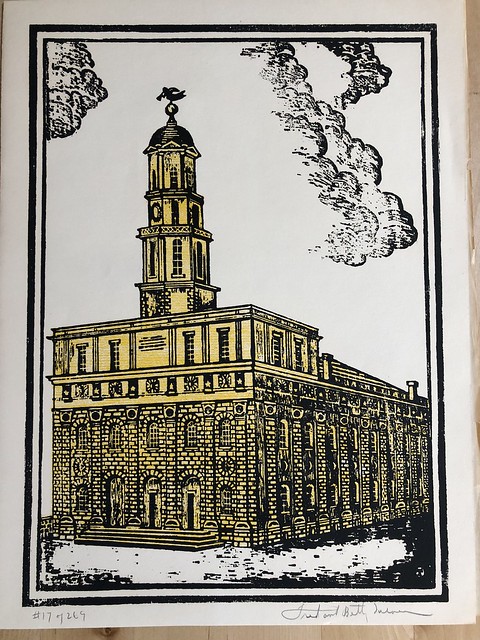 I can only imagine that most of these cards have been lost to a combination of time and people just not knowing what they are. I know of only two complete sets of all 29 cards. As for my own collection, I’ve got a long way to go – I only have three. I found my first one five years ago, and have only come across two more since. Our trips to Central Illinois frequently involve trips to flea markets and antique shops, and now you know exactly what I look for.

If you’re curious to see what more of these cards look like, the university archives has a website showing cards from different years.

I’m guessing you’ve never heard of O. Winston Link. He was a civil engineer by degree and a photographer by trade, who in 1955 undertook a personal side project which would end up becoming his life’s work. The Norfolk and Western Railway was the last major railroad in the United States to still use steam locomotives at that point, and Link obtained full permission from their president to photograph the last days of the steam era on their railroad, primarily in Virginia and West Virginia coal country. He was even given a key to the railroad’s switch boxes, allowing him to phone dispatchers to obtain exact arrival and departure times for trains and, occasionally, the ability to request a train be held so a photo could be taken at a particular moment.

Link’s photos were not ad-hoc snapshots in any way. The majority of them were taken at night (making him one of the first to popularize nighttime photography), and illuminated by enormous flash arrays he built himself. Link said that not only did nighttime photos romanticize the trains further, but steam locomotive smoke appears white, and therefore not dirty, when lit by flash. Utilizing his background in advertising and marketing photography, his photos were carefully composed to tell a story, and almost always incorporate people to add a humanizing element.

I wish I could tell you I collect his photos, but that’s not possible. I can only afford to be an enthusiast. Original prints typically sell for thousands of dollars at auction. I do own all of his books, which are absolutely beautiful. The tales he tells in black and white are richer than anything I could ever imagine in color.

Link lived in relative obscurity, his photos were popular with railfans but didn’t start to gain mainstream popularity until decades later. You won’t find many photos of him – he preferred to stay behind the camera, but he did have a cameo appearance in one of my all-time favorite movies, October Sky. If you’ve never seen that movie, add it to your list!

I like to say that if you watch October Sky, and you recognize the train engineer to be O. Winston Link, you’re really smart and observant. But if you’re a true rail nerd, you’ll also know that the locomotive he’s driving is a 2-8-2 “Mikado” #4501, which was actually owned by the Southern Railway and painted to be a Norfolk & Western engine just for the movie. The N&W never used 2-8-2 locomotives.

If you made it this far, thank you for reading about my hobbies. I promise to return to my regularly scheduled technobabble in short order.

This month we celebrate the 100th edition of T-SQL Tuesday, originally created by Adam Machanic back in November 2009. Adam had asked us to write about what topics we might be covering 100 months into the future. I’m not good at predicting the future, but in the spirit of time travel, I am going one month into the past and writing about last month’s topic which was hosted by Aaron Bertrand.